Black Star is a hip hop group formed by MCs Mos Def and Talib Kweli.  Black Star arose from the underground movement of the late 1990s, which was in large part due to Rawkus Records, an independent record label stationed in New York City. They released one self titled album. Though the record achieved little commercial success, they (and other members of the Native Tongues Posse) helped shape underground alternative rap and helped bring it further into the mainstream eye. Both have gone on to greater commercial and critical success in separate solo careers. 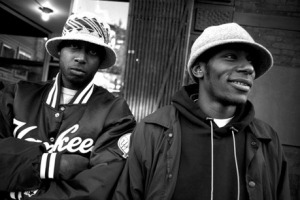 Black Star’s emergence into the hip-hop scene came at a crucial point in music history. Following the deaths of both Biggie Smalls and Tupac Shakur, hip-hop was consumed in a world of chaos. Black Star attempted to bring reconciliation in the wake of these violent deaths. The self titled album contains various references to Biggie and Tupac, and attempts to create reconciliation in the hip-hop world: “I said one, two, three. It’s kinda dangerous to be an M.C. They shot Tupac and Biggie. Too much violence in hip-hop.”  BlackStar has been an inspiration for the BLL family.  They exemplify what our movement is about………….showing the positive aspects of Hip-Hop music. This doesn’t mean we will  shy away from discussing and showing the negative aspects of the music either.  They are both important.  Our goal  is to enlighten Asian people and educate them on the different types of Hip-Hop music. It’s not only negative.  Everybody Shines!